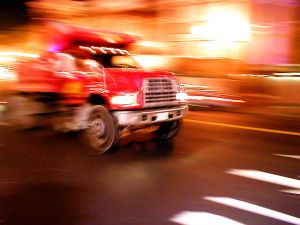 The dump truck overturned and struck a utility pole. Traffic signals and a street sign were knocked to the ground, leaving other lines suspended from the top of the pole. A fire hydrant was also knocked over in the commotion. The dump truck spilled its load. Bibb County Coroner Leon Jones reports that the car's driver was pronounced dead at the scene.

Our Georgia trucking accident attorneys understand how catastrophic these accidents can be. A number of roads near that intersection were closed for quite some time. Traffic lights were out on Mercer University Drive near Macon Mall between Bloomfield and Anthony roads because of the accident. Substantial property damage is a given and motorists and pedestrians are oftentimes killed in traffic collisions with these big rigs.

According to the National Highway Traffic Safety Administration, there were approximately 380,000 large trucks on U.S. roadways that were involved in a traffic accident in 2008. A large truck is defined as a vehicle having a gross vehicle weight rating greater than 10,000 pounds. More than 4,000 large trucks were involved in traffic accidents that resulted in death. A total of 4,229 people died. These fatalities counted for more than 20 percent of all traffic deaths reported for the entire year. Another 90,000 people sustained injuries from these incidents.

Nearly 200 people in Georgia died because of traffic accidents that involved a large truck in 2008.

If you or a loved one has been injured in a car accident with a truck, contact the Atlanta Personal Injury Attorneys at The Law Office of Casey W. Stevens. Call 877-217-7230 for a free case evaluation.