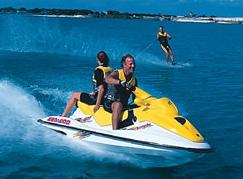 In the blink of an eye, a summer outing with family and friends at the lake or beach can turn disastrous and deadly. Personal Water Craft (PWC's) have gained popularity in recent years, and the number of jet skis registered has nearly doubled since 1980. In 2011, jet skis were the cause of 1,158 accidents and 44 deaths on the water, second only to open motorboats. Riding a jet ski can be a very exhilarating experience, but it can also be very dangerous. Accidents that involve jet skis are more likely to cause critical injuries such as traumatic brain injury and spinal cord injuries or fatalities, known legally as "wrongful death".

A jet ski tragedy which made national headlines struck as recently as July 2012. Kyle Glover--the former stepson of R & B star Usher--and another 15 year old girl were run over by a jet ski while being pulled on an inner tube behind a pontoon boat on Lake Lanier north of Atlanta, Georgia. The two were airlifted to Children's Healthcare of Egelston Hospital in Atlanta with critical injuries. Tragically, upon arrival at the hospital, Kyle had no brain activity and was declared brain dead. The shocking part of this tragedy is that the jet ski that collided with the two youngsters was being operated by a family friend at the time of the accident.

This heart-wrenching accident has brought questions about jet ski safety into the forefront of the public media, and many are starting to question whether it is all too easy for an untrained person to climb aboard a jet ski and go flying recklessly through the water. Some safety advocates are now pushing for a separate license requirement for personal watercraft. One group that is speaking out is the National Association of State Boating Law Administrators; they are asking states to require all operators of personal watercraft to be at the minimum age of 16 and complete mandated PWC educational classes. Unfortunately, just like automobile accidents, age is a large factor in jet ski accidents.

Despite the warnings, jet ski accidents will continue to happen, on our Georgia lakes every year. If you or a loved one has been injured as a result of another person's negligence, contact our law firm today for a free consultation.

Resources
Are Tougher Boat Safety Laws in Georgia The Answer?
Contact Us
Cases We Handle
Client Reviews
★★★★★
After being involved and a five car accident I contacted Casey Stevens law firm. I was given his number by a fellow coworker at my job who had used him in the past and was very satisfied with his services. The car accident included myself my husband and my son, the accident was determined to be the fault of two drivers involved in the accident. Casey personally came to my home the next day and said down with me and my family at the kitchen table and went over all the events of the accident. There were months and months of physical therapy, doctor visits injections and while my son had to have his mouth wired after having his jaw broke in three places. Casey and his staff worked continuously on our case and after it was all said and done, they where able to get us over $300,000 in damages. I really want to Thank Casey Stevens and his staff for always being available for phone calls and answering any questions I might have. I will continue to recommend potential clients to Casey Stevens law firm. Nina F
★★★★★
Outstanding Attorney. Casey Stevens is outstanding!! Everyone there put me at ease and made me feel that my case was important to them, I was not just another number to them. Their professional staff were always on hand to answer any questions that I had and they sincerely cared about my well being. If I ever need legal help again, you will be my first and only call Susan
View More
Submit a Law Firm Client Review