Deer-Car Accidents in Georgia a Threat through Year's End

Your chance of a deer-car accident in Georgia is now 1 in 154. That's down slightly from 1 in 150 last year, according to a study conducted by State Farm Insurance. Although you are statistically less likely to hit a deer, that doesn't mean that it's okay to let your guard down. Motorists still need to be on the lookout for deer near our roadways. 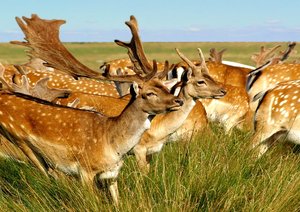 The rates have been decreasing in Columbia County as well, where the clash between commuter traffic and rural areas typically increases the risks for these serious accidents. County workers retrieved about 600 deer from the roadway each year, according to The Augusta Chronicle.

Just less than 350 deer have been retrieved from Columbia County's roads so far this year. Researchers attribute this decline to a number of factors, including the status of the economy and the diminishing deer population. Our car accident attorneys remind motorists to use caution -- particularly around sunset through the remainder of the year. Those who are seriously injured in an accident with a deer may be able to collect compensation for medical bills and other expenses through the driver's insurance policy or their own insurance carrier. An experienced attorney should be consulted in cases that involve serious injury.

"When you have a big year in the building industry, with a lot of land being cleared and deer being displaced, there can be more accidents," said Linda Glasscock, Columbia County's animal services manager.

According to the Georgia Department of Transportation, Columbia County is one of the state's most at-risk areas for these types of accidents. Motorists driving through the county have an accident rate of about 40 per 100 million vehicle miles traveled. This rate is nearly four times greater than the state's average.

The population of deer in Georgia was at its highest in 1997 at more than a million. According to Georgia's Wildlife Resources Department, the population currently sits at just over 900,000.

Motorists are urged to be cautious in November, which is right in the middle of deer-mating season. Nearly 20 percent of these accidents occur during the month. October is the second most dangerous, followed by December as the third.

If you're about to collide with a deer on our roadways, try the following:

If you or someone you love has been injured in an accident, contact the North Georgia Personal Injury Attorneys at The Law Office of Casey W. Stevens. Call 877-217-7230 for a free case evaluation. Representing clients in Atlanta, Alpharetta, Woodstock and all of North Georgia.