According to Atlanta area personal injury lawyer, Casey W. Stevens, A deck collapse is a common example of a premises liability case in the State of Georgia. Although negligence in these types of cases often seems obvious, the truth is that these cases often result in the property owner, or more likely their insurance company, denying any liability at all. While they cannot deny that the collapse or railing failure actually happened, they can deny that they are liable due to ignorance of any structural issues involving the deck, or they may claim that patrons or guests themselves are responsible because they used the deck in a manner in which it was not intended to be used. When we are approached by a potential client to handle their deck collapse injury claim, we hire an expert to evaluate the deck debris, and write a report based upon their findings.

So What Causes a Deck to Collapse? 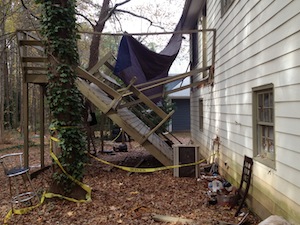 From one of our case files: This is a deck that collapsed due to a construction defect. It was not adequately secured to the house with the appropriate number of lag bolts. Injuries, including broken bones, required hospitalization.

The most common cause of a deck collapse is age. By some estimates, there are as many as 50,000 wooden decks in the United States that are more than 25 years old. A properly maintained deck can last for years, but a neglected deck is an accident waiting to happen. The failure to seal the wood against the elements can speed the breakdown of the wood, and accumulation of grease and oil under a grill can make rot and decay more possible. Screws, bolts, and nails can also work loose as wood expands and contracts due to the exposure to the elements. According to Georgia Law, the property owner is responsible for inspecting and properly maintaining the deck and insuring that it is safe for visitors.

Another common cause of deck collapses in Georgia is a code violation. There are certain Georgia state specific codes in place that are meant to prevent collapses from happening, but many times building codes are ignored or never even consulted when a deck is being installed. In this era of DIY homeowners, decks are considered a weekend warrior project and, many times, the homeowner has absolutely no idea what the codes are or even how to follow them. There are codes that dictate if a deck is even allowed, the height of the railings, the space between those railings, the acceptable height of the deck, how it should be anchored to a structure, how the deck is supported, etc. Failure to adhere to the Georgia codes can be dangerous, even deadly.

However, one of the most difficult causes of collapse to prove liability is overcrowding. Insurance companies will claim that those who overcrowded the deck are responsible for the collapse, but in truth, the property owner should be aware of the structural integrity of a deck on their property and take precautions to ensure that overcrowding does not occur.

A deck collapse can result in a wide variety of injuries from not just the collapse and resulting fall, but also from other elements that are commonly present on decks. For example, if there were a lit grill on the deck, there may be burns in addition to broken bones, cuts and scrapes, and bruises. A gas grill might even result in an explosion causing further injuries from flying debris.

What can I do if I am Injured in a Deck Collapse?

If you or your loved one has been injured in a deck collapse, you should contact a qualified personal injury attorney as soon as possible. Evidence as to why the collapse occurred is crucial to proving liability and must be collected before repairs are made or the collapsed structure is disposed of.