A Georgia DUI Accident on Benadryl?

People often have the perception that one must be driving under the influence of illegal drugs or alcohol in order to get a DUI; however, this is not always the case. With the growing popularity of prescription drugs and easy access to over-the-counter drugs, the number of DUI drug charges related to these substances has increased.

According to Georgia accident lawyer, Casey W. Stevens, a person can get a DUI by driving under the influence of "any drug" to the extent that it is less safe for the person to drive. Consider the popular allergy medication Benadryl (diphenhydramine hydrochloride) which is an antihistamine with mild sedative effects. Combining Benadryl with alcohol can synergistically increase the sedative effects and the risk of a car crash with serious injuries.

Don't make the mistake of thinking that because a doctor has prescribed you a therapeutic dose of a drug, you are protected from getting a DUI. In Georgia, the less safe law* still applies to prescriptions from your doctor. The FDA has mandated warnings of packages of prescription sleep aids that sleep-driving may occur due to the dozens of reports of sleep driving accidents. Combine sleep-driving with an accident with serious injuries, and you could be looking at a DUI felony with 7-15 years in jail. Imagine the horror of taking a prescription sleep medication before bed and waking up several hours later finding that you have been involved in an accident and are being charged with DUI and potentially vehicular homicide. DUI's in Georgia impose strict liability where intent to commit a DUI need not be proven. 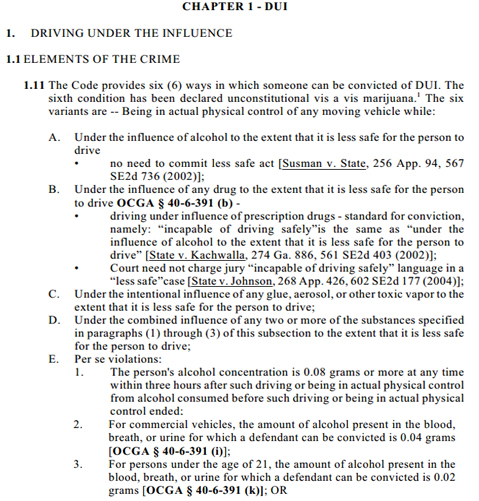 As used in this Code section, the term "traffic accident resulting in serious injuries or fatalities" means any motor vehicle accident in which a person was killed or in which one or more persons suffered a fractured bone, severe burns, disfigurement, dismemberment, partial or total loss of sight or hearing, or loss of consciousness.

How to avoid a DUI drug accident:

If you have been injured by an intoxicated negligent driver, call the Law Office of Casey W. Stevens for a free consultation. Our clients receive free consultations, and pay no attorney fees at all until their case is resolved.